catherine.gee, 4 ay ago
By Author Name
|
Previous Next

With global recorded-music revenue reaching $25.9 billion, executives share success stories from every continent — while joining in the calls for peace in Ukraine. 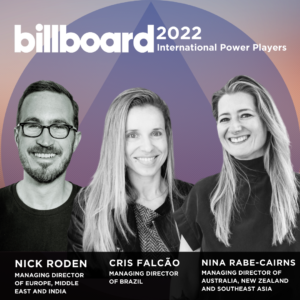 Ingrooves reports that its global expansion over the past year was up by nearly one-third with new personnel hired in India, Mexico, the Philippines, Italy, the Netherlands, Denmark and Iceland, increasing its local presence to 23 countries. The distribution, marketing and technology company has “global streaming success powered by top indie labels GR6, Dirty Hit, Del Records and a massive year in K-pop,” says Roden. Ingrooves’ long reach is evident in Shouse’s global hit “Love Tonight” on label Onelove, which racked up over 1 billion streams and received top 20 airplay in 21 territories, according to Ingrooves. “I’m personally so thankful and proud,” says Roden, “to be part of a cohesive global team that kicks into gear whenever and wherever needed.”

This article is part of our "Blog Series"

Tags in this article
Billboardinternationalpower player